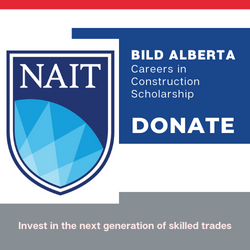 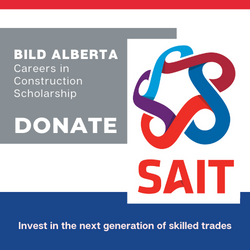 Donate to NAIT
Donate to SAIT

We are excited to launch the BILD Alberta Scholarships for Construction Careers!

As members know, our industry is facing considerable shortages in skilled labour which leads to delays and higher housing costs for Albertans. Without action, this will only get worse with an estimated 21% of the skilled labour force retiring before 2030.

Alberta’s housing affordability has become a cornerstone in our province’s ability to attract new residents and business investment and must remain top of mind if we are to prevent escalations in prices like other Canadian markets. This is an investment by our industry to tackle labour challenges that preserve housing affordability in Alberta. By investing in the next generation of skilled trades, our industry is investing in Alberta.

BILD Alberta's Executive Director, Scott Fash was on hand to make the announcement with Jay Westman at both NAIT and SAIT campuses. "Skilled trades are a critical component in building affordable, safe and energy efficient homes. As one of Alberta’s largest employers, these are incredibly well-paying, rewarding careers and we need to do a better job promoting them and removing roadblocks. This is a critical first step in achieving that and we look forward to partnering with the Government of Alberta and other organizations on a broader plan to elevate the skilled trades, eliminate barriers and attract more people to these incredible careers," said Fash.

In November, it was announced that nearly half (over $7 million) of the $15 million goal has already been raised to curate future skilled tradespeople through a career in construction. This is a significant investment from BILD Alberta members into Alberta. If you’d like to help us reach our $15 million goal to grow our skilled workforce and maintain Alberta’s housing affordability advantage, donate to the school of your choice by clicking on the button above.